MGM City Center, a small metropolis at the heart of Las Vegas Strip 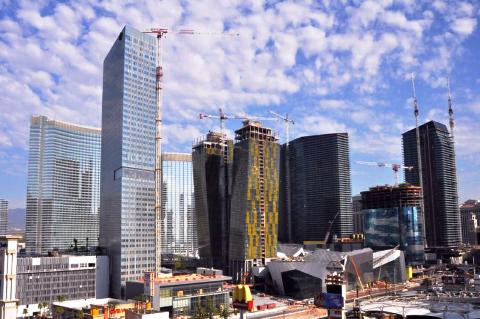 Aria Casino: The centerpiece at MGM City Center consists of a 60 story, 4,000-room Aria casino. Aria is connected to a 500,000 square foot retail and entertainment district named Crystals. It has a 25,000 square feet convention center in addition to a 2,000 seat theater.  Onsite trams connect the City Center towers with each other and the Bellagio Casino.

The infamous HARMON Tower: 650 million dollar error which functioned as the most expensive billboard ever built for a few years and is erased now.

The 5-star Residence at Mandarin Oriental Hotel: a luxury hotel/residence is split between hotel rooms and residences. The 277 residential condos are located on the 23rd floor up and are priced from $1000 per square foot.

The VDARA high-rise condo-hotel is located in the west of CityCenter. This tower is curved and features 57 stories and 1543 units. VDARA STOPPED SELLING condo-hotel units due to lack of interest long ago and is operated as a hotel now. Vdara Condominiums measure from 500 to 1750 square feet. Condo-hotels could have been enrolled in the MGM rental pool and would be rented on behalf of the owner for a percentage of the revenues.

The Veer Towers: consist of two towers of 335 residential luxury high-rise condos. These 37 story towers are built at a 5-degree incline and seem like they are dancing with each other. We will discuss Veer luxury condos on its own page.

One must remember that MGM City Center Las Vegas was conceived during the great real estate boom time and when the economy crashed the MGM was too involved to pull out.

In the recession, Las Vegas high-rise condos for sale prices dropped by 70%, so initial condo pricing at City Center was too high. However, after several price cuts, they are selling in 2017 and the median sales prices of Veer towers and Mandarin Oriental condos has gone appreciated at twice the rate of most other condo towers since 2013.

City Center is owned by Dubai Port World and MGM. Both are highly leveraged and heavily in debt.  MGM was close to declaring bankruptcy at one point during the construction of City Center.

About MGM City Center Las Vegas was last modified: May 30th, 2018 by masouds