In the overview of Las Vegas high-rise condo market in 2018 we will prove that despite all the hype about the Raider’s moving here or a very lively market, we are pretty much back to 2014-2015 numbers.

We will also show that even though the market has rebounded from the significant $44,000 drop in median price of 2016 to finish 2017 at $340,000, the main reason for the rebound is the big reduction in the active listing inventory and not increasing sales or the Raiders moving here.

This is the only formal Las Vegas high-rise condo market report published online for two reasons:

1: This is the only formal Las Vegas real estate market report which is based on the median prices of sold units to be found anywhere.

2: Contrary to the MLS, we only include true towers and have removed mid-rise projects. You can find the included tower’s name in the right-hand column of the page.

Let’s briefly discuss the current active listing inventory which means listings that are not under contract as well as the effect of foreclosures and short sales on the market.

As of January 1st, only 7 out of 397 active listings are foreclosures and short sales. Of the 861 true high-rise condo sales in 2017, only 11 have been foreclosures and another 15 have been short sales. This means that only about 3% of the units sold so in 2017 have been distressed units and given that most of these have been in lower price ranges, their effect on the market is negligible. 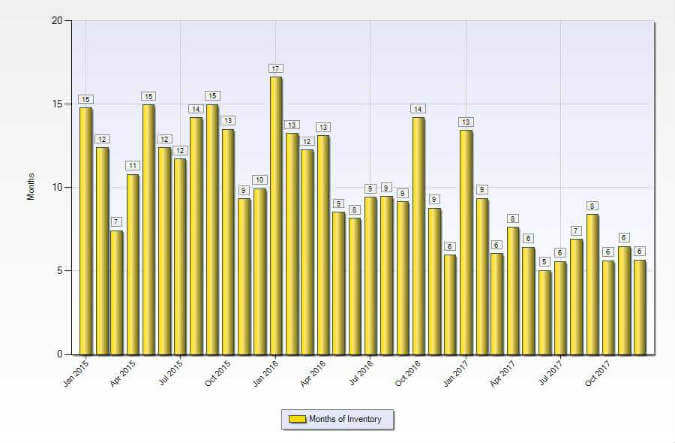 The median price only shows the market direction, however, given the large discrepancy between unit prices better criteria is the median price per square foot which is more stable as well.

The median price per square foot for Las Vegas high-rise condos in 2017 stands at $308 per square foot. Again there isn’t much improvement from 2015 numbers.

Lastly, we want to show what hype and incorrect information does to high-rise condominium sales.

Expired listings versus unit sales in 2017

In 2014-2015, two listings have expired for every unit sold, the same stands at 1.7 for 2017. And there is only one reason for it, incorrect pricing and the seller is not blameless. They usually go for the listing agent who claims to be able to get the highest price for the listing without requiring them to prove it.

Incorrect pricing results in the listings languishing on the market with no previews or offers for months. Then either the dispirited seller sells the unit with a serious lowball offer or it expires. The highest prices are paid for units that are priced correctly and sell within 30-60 days.

It is the listing Realtor’s duty to provide a highly educated asking list price which is not possible without a comprehensive understanding of the market. But then again we are the only Realtors who have been providing it for the past 3 years.

However, this report only shows what has happened in the whole market and as always there are winners and habitual losers. In Las Vegas high-rise appreciation rates since 2011, we discuss each tower has appreciated individually and there is a big gap between the best appreciating high-rise project and the least appreciating towers.

It has been our experience that hype doesn’t care much about the facts and despite all the hype about the Raiders moving to Las Vegas, we have found little evidence to back it up. However, the economy is roaring back and we predict further price escalations, but price gains will not be evenly distributed.

In the next video, we will talk about how much each tower has appreciated since 2011 when the Las Vegas real estate bottomed out.

This short video is just a small part of the big story. Make sure to visit our website and blog to see comprehensive information about your desired tower. If you want to buy or invest in Las Vegas high-rise condos for sale, please call us at 800-762-4917 or use the contact form.

On behalf of The Saber Team, this is Karen Saberzadeh of Realty One Group and www.lasvegas4us.com wishing you a great day.

Do NOT follow this link or you will be banned from the site!